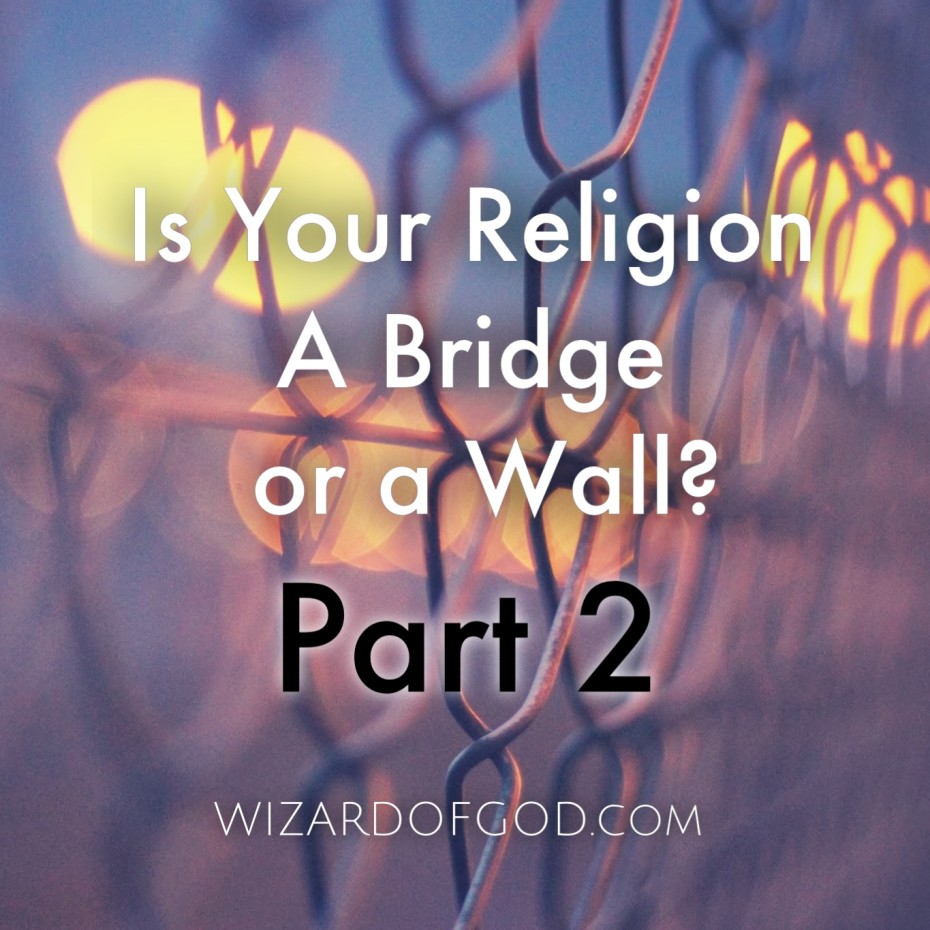 In our last blog we talked about building (religious) bridges to a “separated” God.

Before we move forward, lets take a step back. Why are people religious? Studies report that 8 in 10 people in the world identify with a particular religion.

You can certainly look up the definition for yourself, but the essence of “religion” is binding oneself to the keeping of rules that govern conduct, rituals and formulas by which to approach God.

It calls for the exercise of the devotee’s will for complete obedience to its precepts. The reason for binding oneself is to please, in the hopes of ultimately being accepted by God.

The real rewards of religion are mostly reserved for after you die. Life down here on planet earth is all about earning our way into heaven and/or for the accumulation of spiritual tokens, that can be redeemed for heavenly cash and prizes.

As the old song goes, “People everywhere, just want to be free.” Freedom from oppression is what so many are fighting and dying for all over the world. Why then, would people voluntarily choose to “bind themselves” to religious systems? There are two types of motivation when it comes to religion.

Slaves: Persons who “serve” under fear of punishment. Strictly speaking, slaves cannot be “forced” to serve. They serve as a means to an end, to avoid punishment. To be a slave, is to be under the necessity of choosing between two evils, neither of which, if left to themselves would they choose.

Mercenaries: (Soldiers of fortune) Those who serve or engages in battle, for private gain. Fulfilling patriotic duty is the natural reward to a soldier. Thus, a soldier who engages in battle solely for monetary reward is called a mercenary.

Most people engaged in religion have motivations similar to slaves, mercenaries, or a combination the two. Religious observances are done in order to avoid punishment or to receive rewards. (Whether in this life or the hereafter.)

The religious “worship” of persons with slave and/or mercenary motivations will necessarily be rooted in selfishness, and self-centeredness. Slaves are obeying to save their own skin and mercenaries are obeying for personal gain! So, in essence God is “most” pleased with those who are “most” selfish?

In closing, lets take a big step back.  Imagine a God (the Creator) who formed the universe, millions of galaxies. Now imagine this God being even slightly impressed with religious rituals, observances, etc.. A “God” sitting “up there” watching the webcam of the world, doling out rewards and punishments to (finite) persons based on how well they perform religious practices. Just stop for a moment and think about this.

But what is God thinking? How can we know?

The absurdity of “religiousness” is what we explore in The Wizard of god. You can download the free e-book on our website or buy a paper copy on Amazon.